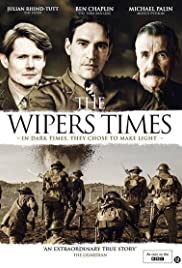 It's 1916 and British Captain Fred Roberts (Ben Chaplin,The Thin Red Line) and his detachment discover an abandoned printing press in the ruins of Ypres, Belgium. Roberts has an idea - he will produce a newspaper to raise the spirits of his soldiers. They call it The Wipers Times - after the army slang for Ypres - and fill it with spoofs, jokes, and subversive comedy.

Have you already watched The Wipers Times?