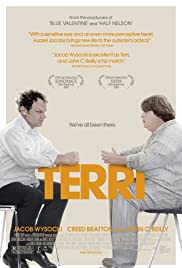 A hit at the Sundance 2011 Film Festival, Terri is a moving and often funny film about the relationship between Terri, an oversized teen misfit, and the garrulous but well-meaning vice principal (John C. Reilly) who takes an interest in him. Terri is produced by the team behind Blue Valentine and Half Nelson, and directed by Azazel Jacobs (Momma's Man). -- (C) ATO Pictures

Have you already watched Terri?