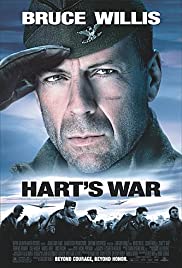 Set in a Nazi prisoner of war camp, Lt. Tommy Hart (Farrell), a Harvard law student before enlisting, is assigned by top ranking Colonel William McNamara (Willis) to defend an African-American airman (Howard) accused of murder in a camp trial held by his fellow American prisoners.

Have you already watched Hart's War?