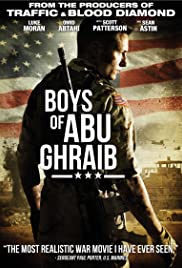 Jack Farmer (Luke Moran), a soldier from small town America, works in Iraq’s most infamous prison, Abu Ghraib, where he’s tasked with guarding the Army’s highest priority detainees. Pressured by his superior (Sean Astin) into using harsh techniques on a seemingly innocent detainee (Omid Abtahi), the seductive allure of war quickly turns to a haunting reality that threatens to break him.

Have you already watched Boys of Abu Ghraib?