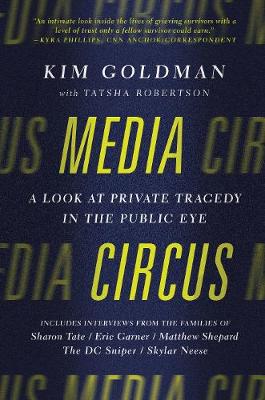 Media Circus: A Look at Private Tragedy in the Public Eye by Kim Goldman

(0 votes)
Imagine losing a loved one in the public eye. A media frenzy ensues and spreads your family name through the news. Reporters ambush you, and across the country, strangers gossip about your personal loss. Welcome to the circus. No one understands better than Kim Goldman the complex emotions of individuals suffering a personal tragedy under the relentless gaze of the media. During the famed O.J. Simpson trial, Kim, whose brother, Ron Goldman, was brutally murdered, became the public poster child for victims suffering in the public eye. In Media Circus, Goldman, now a dedicated victims' advocate who works with families across the country, presents the first collective look at these ordinary, grieving victims--forced to manage their very private trauma and despair in a very public way. Through candid interviews and detailed, original reporting, Media Circus delivers riveting, humanizing, and inspiring stories from the victims and survivors of violent crimes who found themselves the focus of national media attention. Its heartfelt narratives showcase the unique challenges of coping with and healing from grief when the whole world is watching.In these pages, the families of other victims tell their stories, including: Esaw And Emerald Garner, wife and daughter of police brutality victim Eric Garner (2014) Scarlett Lewis, mother of six-year-old Newtown tragedy victim Jesse Lewis (2012) Debra Tate, sister of Charles Manson murder victim Sharon Tate (1969) Judy Shepard, mother of gay hate-crime victim Matthew Shepard (1998) Mildred Muhammad, ex-wife of the DC Sniper (2002) Tere Duperrault Fassbender, survivor of family's brutal murder at sea (1961) Collene Campbell, sister of murdered NASCAR driver Mickey Thompson (1988) Marie Monville, wife of the Amish Shooter (2006) Dave And Mary Neese, parents of teen murder victim Skylar Neese (2012) Scott And Kathleen Larimer, parents of Aurora theater shooting victim John Larimer, and Shirley Wygal, mother of Aurora theater shooting victim Rebecca Wingo (2012) Media Circus goes beyond the names and faces to show the real victims behind the stories.

Write Review - Media Circus: A Look at Private Tragedy in the Public Eye (2015)

New Topic - Media Circus: A Look at Private Tragedy in the Public Eye (2015)

Trailer: Media Circus: A Look at Private Tragedy in the Public Eye (2015) ×

Have you already read Media Circus: A Look at Private Tragedy in the Public Eye?