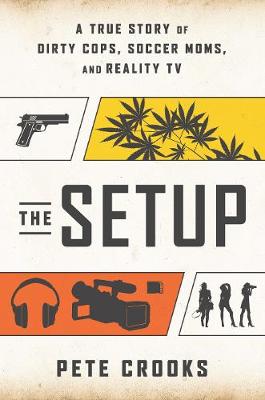 The Setup: A True Story of Dirty Cops, Soccer Moms, and Reality TV by Pete Crooks

(0 votes)
The pitch went like this: Chris Butler, a retired cop, ran a private investigator firm in Concord, California. His business had a fascinating angle--his firm was staffed entirely by soccer moms. In fact, Butler employed PI Super Moms: attractive, organized, smart, and trained in investigative techniques, self-defense, and weaponry. This American Life host Ira Glass described them as "MILF: Charlie's Angels." When this story came across Pete Crooks's desk when he was working at Diablo magazine in 2010, he was instantly hooked. He'd heard a little bit about Butler and his super moms in the news; they'd been featured in People magazine and on Dr. Phil. What Butler's publicist was offering was too tantalizing to pass up: an opportunity to ride along with Butler and a few of his sexy PIs as they prepared to start filming a reality TV show. But after the ride-along--and after he started receiving mysterious emails from one of Butler's employees--Crooks started to realize something didn't seem right. After doing a little digging, he discovered the "sting" he'd seen only had one real victim...him. The PI bust had been a setup. Crooks wasn't a hardboiled crime reporter.He did lifestyle pieces for a regional magazine. The more he learned about Butler's operation, the more he realized he was in far over his head. But swallowing his fears, he decided he was going to write an expose on Butler and his entire organization. He soon found himself deep in the underbelly of fake sting operations, wannabe celebrities, police corruption, drug-dealing, reality television, double-crossing employees, and more twists and turns than a dozen crime thrillers.

Have you already read The Setup: A True Story of Dirty Cops, Soccer Moms, and Reality TV?