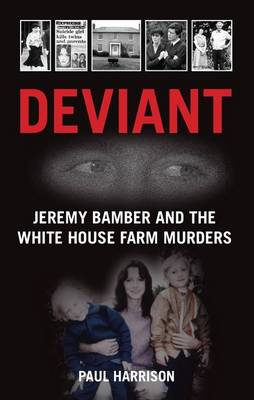 (0 votes)
Penned by crime writer and former police officer Paul Harrison, Deviant is the only book on the subject written by someone in attendance at the 1986 trial of Jeremy Bamber, accused of murdering five members of his family in the dead of night at White House Farm in Essex.A culmination of three decades of research, in the course of this work the author has interviewed all the key investigative police officers and lawyers, and communicated with the convicted murderer and a number of his associates.The investigation has taken the author around the globe arousing a great deal of publicity and, in the process, antagonised the small band of fanatical supporters of the killer resulting in a number of death threats. The author has also incurred the displeasure of Essex Police, highlighting incompetence and internal subterfuge, issues which clearly hampered the prosecution of the crime.With startling evidence never before seen and a dramatic conclusion this, for the first time in print, is the real story of what happened the night three adults and two children were bludgeoned and shot to death at White House Farm.

Have you already read Deviant: Jeremy Bamber and the White House Farm Murders?