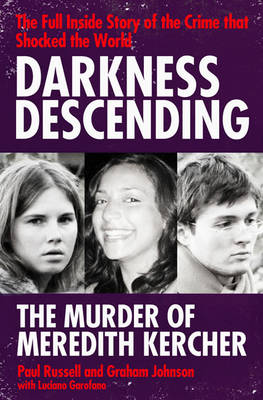 Darkness Descending: The Murder of Meredith Kercher by Paul Russell

(0 votes)
It was a brutal murder, and the trial of the decade. On 1 November 2007, 21-year-old British student Meredith Kercher was slaughtered in cold blood in the apartment in Perugia, Italy, that she shared with three other girls. Two bright young people, Amanda Knox and her Italian ex-boyfriend, Raffaele Sollecito, stood accused of the killing in a trial that lasted through 2009. They were found guilty and sentenced to twenty-six and twenty-five years respectively on 4 December. A second man, Ivory Coast-born Rudy Guede, 22, had already been found guilty of the sexual assault and murder of Meredith in a separate trial in 2008 and sentenced to thirty years, but the prosecution always stated that he didn't act alone. Kercher was a model student whilst American Knox acquired a reputation that fuelled specualtion about her character. Her bizarre behaviour just after Meredith's body was found, her false accusation of an innocent man, her weak alibi and her DNA on the murder weapon - a kitchen knife found to be scubbed with bleach - went against her. TV producer Paul Russell and critically acclaimed crime writer Graham Johnson have teamed up with leading Italian forensics expert General Luciano Garofano to reveal the full truth behind this sensational murder and its trial. They unravel all the details and study all the personalities in this case that has stunned the world. Complex, and some say controversial, DNA evidence is explained in simple language and, bit by bit, a story emerges of brutality and jealousy in a university town where all was not what it seemed. Their findings make for gripping, sensational reading.

Have you already read Darkness Descending: The Murder of Meredith Kercher?