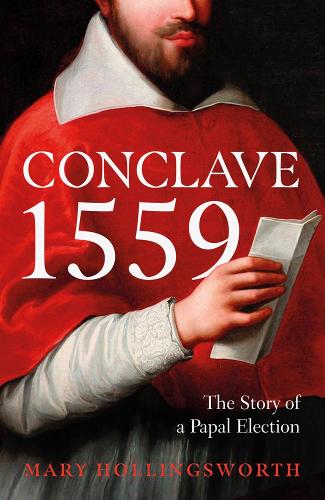 Conclave 1559: Ippolito d'Este and the Papal Election of 1559 by Mary Hollingsworth

August 1559. As the long hot Italian summer draws to its close, so does the life of a rigidly orthodox and profoundly unpopular pope. The harshly repressive papacy of Paul IV has seen the establishing of the Roman Inquisition and the Index of Prohibited Books, an unbending refusal to open dialogue with Protestants, and the ghettoization of Rome's Jews. On 5 September 1559, as the great doors of the Vatican's Sala Regia are ceremonially locked, imprisoning for sixteen weeks the forty-seven cardinals who would choose his successor, the future of the Catholic Church - and the whole of Europe - hangs in the balance.

Mary Hollingsworth offers a compelling and sedulously crafted reconstruction of the longest and most taxing of sixteenth-century papal elections - a conclave that was acrimonious and faction-ridden even by the exalted standards of such disputatious gatherings. Its crisscrossing fault lines divided not only moderates from conservatives, but also the adherents of three national 'factions' with mutually incompatible interests. France and Spain were both looking to extend their power in Italy and beyond and had very different ideas of who the new pope should be - as did the Italian cardinals.

Drawing on the detailed account books left by Ippolito d'Este, one of the participating cardinals, Conclave 1559 provides remarkable insights into the daily lives and concerns of the forty-seven men locked up for some four months in the Vatican. Its anatomizing of the repeated voting, relentless bargaining and counter-bargaining, and eventual compromise that brought the conclave to an exhausted close, provide a fascinating snapshot of the high politics of Christian Europe at a crucial crossroads in its history.

Have you already read Conclave 1559: Ippolito d'Este and the Papal Election of 1559?