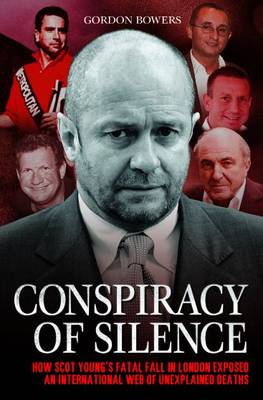 Conspiracy of Silence: How Scot Young's Fatal Fall in London Exposed an International Web of Mysterious Deaths by Gordon Bowers

(0 votes)
On 8 December 2014, the shattered body of bankrupt property tycoon Scot Young was found impaled on the railings sixty feet below his GBP3-million penthouse apartment. The police said there was nothing suspicious about his death, but a Russian radio station wanted to know: 'Did he jump or was he pushed?' It was soon the question everyone was asking. For six years, Young had been fighting an acrimonious divorce case in the High Court. His wife accused him of hiding his vast wealth offshore. He claimed that he had lost all his money in ill-judge property deal in Moscow, though went to jail rather than produce evidence showing where the money had gone. Though he said he was in debt to the tune of over GBP27 million, he was still seen driving a Ferrari and swigging champagne in exclusive London eateries with a blonde super-model on his arm. Then his wife accused him of being involved with London's notorious crime syndicate, the Adams family. Tales were also told that he had fallen foul of the Russian mafia, who had once dangled him over the balcony of Dorchester Hotel.Five of his inner circle involved in the Russian property deal died in strange circumstance, three in mysterious falls.One was Russian oligarch Boris Berezovsky, the arch-enemy of Vladimir Putin and Roman Abramovich, found hanged in his Berkshire home. Meanwhile, other super-rich friends - who included Sir Philip Green and Simon Cowell - began to distance themselves when Scot's secret dealing brought them into the spotlight, shying away from any involvement in the Ring of Death.

Have you already read Conspiracy of Silence: How Scot Young's Fatal Fall in London Exposed an International Web of Mysterious Deaths?