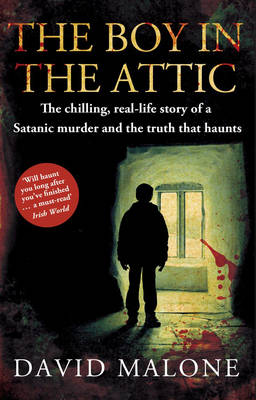 The Boy in the Attic: The Chilling, Real-Life Story of a Satanic Murder and the Truth that Haunts by David Malone

Ireland 1973: a very different world. But a tiny village in County Dublin was about to lose its innocence for ever.

On a bright and sunny June afternoon, a seven-year-old boy was left in the care of his teenage neighbour. No one knew, or would even have dreamed of suspecting, that the teenager was a Satanist. The two went out to the fields to look for rabbits. The child was never seen alive again.

For the first time, in The Boy in the Attic, David Malone reveals the exact events of that summer day: how the youngster was lured to his death, how the teenager came to delve so deeply into the occult and the nightmarish scene awaiting police when they entered the attic.

But there is another disturbing question - how is it that this murder, which was easily one of the most shocking and horrific in living memory, was barely reported upon at all? Why have you never heard of the boy in the attic until now?

Write Review - The Boy in the Attic: The Chilling, Real-Life Story of a Satanic Murder and the Truth that Haunts (2011)

New Topic - The Boy in the Attic: The Chilling, Real-Life Story of a Satanic Murder and the Truth that Haunts (2011)

Trailer: The Boy in the Attic: The Chilling, Real-Life Story of a Satanic Murder and the Truth that Haunts (2011) ×

Have you already read The Boy in the Attic: The Chilling, Real-Life Story of a Satanic Murder and the Truth that Haunts?