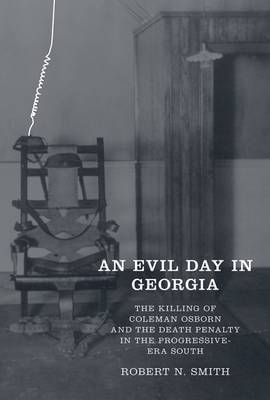 An Evil Day in Georgia: The Killing of Coleman Osborn and the Death Penalty in the Progressive-Era South by Robert N. Smith

(0 votes)
On the night of August 5, 1927, someone shot and killed Coleman Osborn, a store owner in Chatsworth, Georgia, in his place of business. Police and neighbors found only circumstantial traces of the murderer: tire tracks, boot prints, shell casings, and five dollars in cash near Osborn's body. That day, three individuals-James Hugh Moss, a black family man locally renowned for his baseball skills; Clifford Thompson, Moss's white friend who grew up in the Smoky Mountains; and Eula Mae Thompson, Clifford's wife and a woman with a troubling history of failed marriages and minor run-ins with the law-left Etowah, Tennessee, unknowingly on a collision course with Deep South justice.In chilling detail, Robert N. Smith examines the circumstantial evidence and deeply flawedjudicial process that led to death sentences for Moss and the Thompsons. Moving hastily in the wake of the crime, investigators determined from the outset that the Tennessee trio, well known as bootleggers, were the culprits. Moss and Clifford Thompson were tried and convicted within a month of the murder. Eula Mae was tried separately from the other two defendants in February 1928, and her sentence brought her notoriety and celebrity status. On the night of her husband's execution, she recanted her original story and would change it repeatedly in the following years. As reporters from Atlanta and across Georgia descended on Murray County to cover the trials and convictions, the public perception of Eula Mae changed from that of cold-blooded murderer to victim-one worthy of certain benefits that suited her status as a white woman. Eula Mae Thompson's death sentence was commuted in 1928, thanks in part to numerous press interviews and staged photos. She was released in 1936 but would not stay out of trouble for long.An Evil Day in Georgia exposes the historic deficiencies in death penalty implementation and questions, through its case study of the Osborn murder, whether justice can ever be truly unbiased when capital punishment is inextricably linked to personal and political ambition and to social and cultural values.

Write Review - An Evil Day in Georgia: The Killing of Coleman Osborn and the Death Penalty in the Progressive-Era South (2015)

New Topic - An Evil Day in Georgia: The Killing of Coleman Osborn and the Death Penalty in the Progressive-Era South (2015)

Trailer: An Evil Day in Georgia: The Killing of Coleman Osborn and the Death Penalty in the Progressive-Era South (2015) ×

Have you already read An Evil Day in Georgia: The Killing of Coleman Osborn and the Death Penalty in the Progressive-Era South?