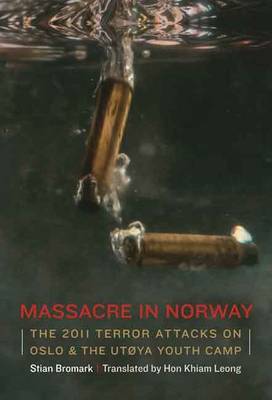 Massacre in Norway: The 2011 Terror Attacks on Oslo and the Utøya Youth Camp by Stian Bromark

(0 votes)
On July 22, 2011, a bomb went off outside government buildings in Oslo, Norway, killing eight people and injuring more than two hundred. Less than two hours later, a gunman claimed sixty-nine lives in a shooting spree at a summer camp on the island of Utoya, while terrified and desperate youths tried to hide or swim to the mainland to escape.Massacre in Norway is the first detailed, hour-by-hour account of the two sequential terrorist attacks by lone-wolf terrorist Anders Behring Breivik.To inform his literary reportage, Stian Bromark compiled interviews with survivors, police officers, government employees, boatmen rescuers, and others who experienced the attacks-the deadliest in Norway since World War II.Massacre in Norway provides crucial, in-depth context for the story including a riveting background portrait of Breivik, the right-wing extremist the police arrested, charged, and convicted of the crime, as well as a history of the Labor Party youth camp on Utoya and its significance in the country's political landscape. An epilogue covers the trial in 2012 and interviews with the survivors.Selv om sola ikke skinner (Even if the Sun Don't Shine) is the first complete, hour-by-hour account of the terror attacks of July 22, 2011 in Oslo and Utoya. Comprised of personal interviews with survivors, police officers, emergency response personnel, government employees, boatmen/rescuers, and others, it provides first-hand accounts of those directly involved and affected by the attacks of that fateful day.Massacre in Norway is literary reportage--an account of the life and background of Anders Behring Breivik before the attacks, beginning with his childhood, through school years, up to his development into a political extremist and activist. The history of the Labor Party youth camp on Utoya and its significance in the political landscape of Norway is the backdrop against which all other events occur. The author, Stian Bromark, provides an insighful portrayal of the darkest day in modern Norwegian history.

Have you already read Massacre in Norway: The 2011 Terror Attacks on Oslo and the Utøya Youth Camp?