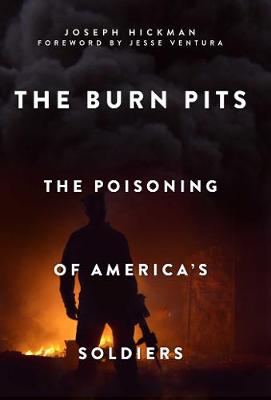 The Burn Pits: The Poisoning of America's Soldiers by Joseph Hickman

(0 votes)
"There's a whole chapter on my son Beau... He was co-located [twice] near these burn pits."-Joe Biden, former Vice President of the United States of AmericaThe Agent Orange of the 21st Century... Thousands of American soldiers are returning from the battlefields of Iraq and Afghanistan with severe wounds from chemical war. They are not the victims of ruthless enemy warfare, but of their own military commanders. These soldiers, afflicted with rare cancers and respiratory diseases, were sickened from the smoke and ash swirling out of the "burn pits" where military contractors incinerated mountains of trash, including old stockpiles of mustard and sarin gas, medical waste, and other toxic material.This shocking work includes: Illustration of the devastation in one soldier's intimate story A plea for help Connection between the burn pits and Major Biden's unfortunate suffering and death The burn pits' effects on native citizens of Iraq: mothers, fathers, and children Denial from the Department of Defense and others Warning signs that were ignored and much moreBased on thousands of government documents, over five hundred in-depth medical case studies, and interviews with more than one thousand veterans and active-duty GIs, The Burn Pits will shock the nation. The book is more than an explosive work of investigative journalism-it is the deeply moving chronicle of the many young men and women who signed up to serve their country in the wake of 9/11, only to return home permanently damaged, the victims of their own armed forces' criminal negligence.

Write Review - The Burn Pits: The Poisoning of America's Soldiers (2015)

New Topic - The Burn Pits: The Poisoning of America's Soldiers (2015)

Trailer: The Burn Pits: The Poisoning of America's Soldiers (2015) ×

Have you already read The Burn Pits: The Poisoning of America's Soldiers?