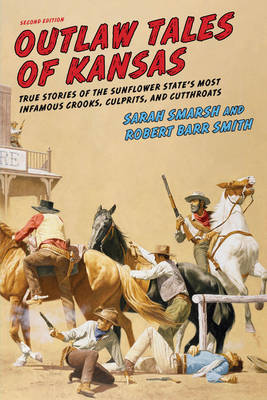 Outlaw Tales of Kansas: True Stories of the Sunflower State's Most Infamous Crooks, Culprits, and Cutthroats by Sarah Smarsh

(0 votes)
From Dodge City to Abilene and beyond, Kansas in its early years was one fine place for outlaws, and one of the most violent places in America's history. Consider the exploits of Jesse James-a sociopathic killer or a Robin Hood who redistributed Union wealth? Or those of Big Nose Kate, whose true identity was much nobler than her reputation as Doc Holliday's longtime companion. That's not to mention the dangerous inmate who became the learned Bird Man of Kansas-a renowned canary expert whose life story became a hit film. All this and more is yours for the reading in Outlaw Tales of Kansas, which introduces fifteen of the most dramatic events, and the most daring and despicable desperados, in the history of the Sunflower State.

Have you already read Outlaw Tales of Kansas: True Stories of the Sunflower State's Most Infamous Crooks, Culprits, and Cutthroats?