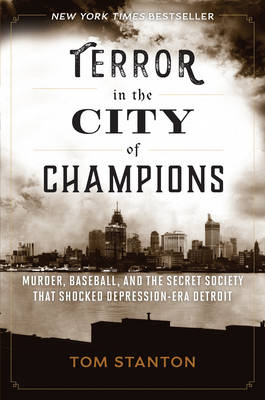 Terror in the City of Champions: Murder, Baseball, and the Secret Society that Shocked Depression-era Detroit by Tom Stanton

(0 votes)
A New York Times BestsellerForeword Reviews' INDIEFAB Book of the Year Winner in True CrimeDetroit, mid-1930s: In a city abuzz over its unrivaled sports success, gun-loving baseball fan Dayton Dean became ensnared in the nefarious and deadly Black Legion. The secretive, Klan-like group was executing a wicked plan of terror, murdering enemies, flogging associates, and contemplating armed rebellion. The Legion boasted tens of thousands of members across the Midwest, among them politicians and prominent citizens-even, possibly, a beloved athlete.Terror in the City of Champions opens with the arrival of Mickey Cochrane, a fiery baseball star who roused the Great Depression's hardest-hit city by leading the Tigers to the 1934 pennant. A year later he guided the team to its first championship. Within seven months the Lions and Red Wings follow in football and hockey-all while Joe Louis chased boxing's heavyweight crown.Amidst such glory, the Legion's dreadful toll grew unchecked: staged "suicides," bodies dumped along roadsides, high-profile assassination plots. Talkative Dayton Dean's involvement would deepen as heroic Mickey's Cochrane's reputation would rise. But the ballplayer had his own demons, including a close friendship with Harry Bennett, Henry Ford's brutal union buster. Award-winning author Tom Stanton weaves a stunning tale of history, crime, and sports. Richly portraying 1930s America, Terror in the City of Champions features a pageant of colorful figures: iconic athletes, sanctimonious criminals, scheming industrial titans, a bigoted radio priest, a love-smitten celebrity couple, J. Edgar Hoover, and two future presidents, Gerald Ford and Ronald Reagan. It is a rollicking true story set at the confluence of hard luck, hope, victory, and violence.

Write Review - Terror in the City of Champions: Murder, Baseball, and the Secret Society that Shocked Depression-era Detroit (2016)

New Topic - Terror in the City of Champions: Murder, Baseball, and the Secret Society that Shocked Depression-era Detroit (2016)

Trailer: Terror in the City of Champions: Murder, Baseball, and the Secret Society that Shocked Depression-era Detroit (2016) ×

Have you already read Terror in the City of Champions: Murder, Baseball, and the Secret Society that Shocked Depression-era Detroit?