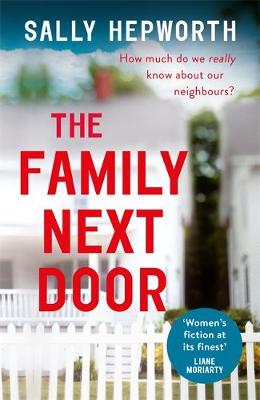 The Family Next Door by Sally Hepworth

The small suburb of Pleasant Court lives up to its name. It's the kind of place where everyone knows their neighbours, and children play in the street.

doesn't fit into this picture of family paradise. Husbandless and childless, she soon captures the attention of three Pleasant Court mothers.

But , and have their own secrets to hide. Like the reason behind Ange's compulsion to control every aspect of her life. Or why Fran won't let her sweet, gentle husband near her new baby. Or why, three years ago, Essie took her daughter to the park and returned home without her.

As their obsession with their new neighbour grows, the secrets of these three women begin to spread - and they're about to find out that when you look at something too closely, you'll see things you never wanted to see.

'It could be written about people I know, and people I've lived next to. And initially that's where my head space was while I was reading it. But then it veered off a little into something a tad larger...and that was okay, because at it's center was still that core nugget of wonder and knowledge that . It would make a also, as the . Secrets, betrayal, infidelity, motherhood, postpartum depression, mental health issues, sexuality, trust, friendship. . .'

'The Family Next Door is almost as once in Pleasant Street, the reader will not want to leave'

Have you already read The Family Next Door?