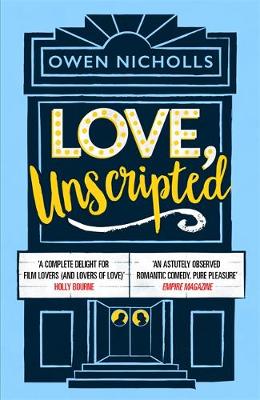 For film projectionist Nick, love should mirror what he sees on the big screen. And when he falls for Ellie on the eve of the 2008 presidential election, it finally does.

For four blissful years, Nick loved Ellie as much as he loved his job splicing film reels together in the local cinema. Life seemed... picture-perfect.

But now it's 2012, Ellie has moved out and Nick's trying to figure out where it all went wrong.

With Ellie gone and his life far from the happy ending he imagined, Nick wonders if their romance could ever again be as perfect as the night they met.

Can love really be as it is in the movies?

'A fun, entertaining story with bags of heart - CultureFly

'filled with movie references and Obama-era nostalgia' Kate Davies, author of In At The Deep End

' that had me shaking with laughter and sniffing away tears. .' Empire Magazine

. . . bursting with some ' Sunday Mirror

'Nicholls shows in this ' iPaper

'. If When Harry Met Sally and High Fidelity had a book baby, this would be it' Emma Cooper, author of The Songs of Us

'High Fidelity for the multiplex generation. Owen Nicholls makes it look easy but it's .' Richard Lumsden, author of The Six Loves of Billy Binns

'' Richard Roper, author of Something to Live For

'' Michelle Elman, author of Am I Ugly?

, both onscreen and off.' Kirkus, starred review

Have you already read Love, Unscripted?