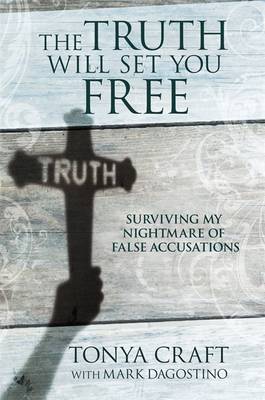 The Truth Will Set You Free: Surviving My Nightmare of False Accusations by Tonya Craft

(0 votes)
Tonya Craft is like a lot of women: A normal, working mother of two. A kindergarten teacher in a small town with a comfortable little house and what she thinks is a pretty good life--until the morning of May 30, 2008, when two detectives show up unannounced on her doorstep and accuse her of molesting three children. In a heartbeat, her whole world comes to a halt. Tonya knows there isn't one shred of truth to the allegations. What she doesn't know is that for the falsely accused, the truth offers little protection. With frightening speed, Tonya is arrested and charged with twenty-two counts of child molestation. She suddenly faces the very real possibility that she's about to lose everything--her job, her family, her reputation...her freedom. This is the true story of a woman who prevails against the most heinous false accusations imaginable. A woman whose life spirals into a witch trial nightmare of guilt before innocence, as her children are taken away without a goodbye, and her own daughter is forced to take the stand against her in a courtroom. Nevertheless, Tonya's resolve to reveal the truth, clear her name, and win back custody of her children is unstoppable.And while Tonya's story will no doubt shock and outrage readers, they will also find encouragement in her uncommon example of undying love, faith, and forgiveness--especially when she forgives the very people who caused her harm. To this day, Tonya is not a bitter individual.

Write Review - The Truth Will Set You Free: Surviving My Nightmare of False Accusations (2015)

New Topic - The Truth Will Set You Free: Surviving My Nightmare of False Accusations (2015)

Trailer: The Truth Will Set You Free: Surviving My Nightmare of False Accusations (2015) ×

Have you already read The Truth Will Set You Free: Surviving My Nightmare of False Accusations?