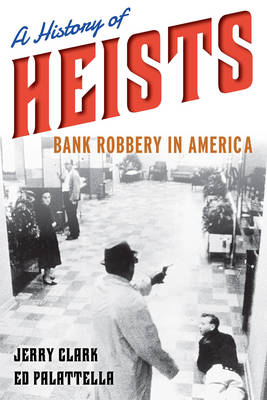 A History of Heists: Bank Robbery in America by Jerry Clark

(0 votes)
No crime is as synonymous with America as bank robbery. Though the number of bank robberies nationwide has declined, bank robbery continues to captivate the public and jeopardize the safety of banks and their employees. In A History of Heists, Jerry Clark and Ed Palattella explore how bank robbers have influenced American culture as much as they have reflected it. Jesse James, Butch Cassidy, Bonnie and Clyde, John Dillinger, Willie Sutton, and Patty Hearst are among the most famous figures in the history of crime in the United States. Jesse James used his training as a Confederate guerrilla to make bank robbery a political act. John Dillinger capitalized on the public's scorn of banks during the Great Depression and became America's first Public Enemy Number One. When she held up a bank with the leftist Symbionese Liberation Army, Patty Hearst fueled the country's social unrest. Jerry Clark and Ed Palattella delve into the backgrounds and motivations of the robbers, and explore how they are as complex as the nation whose banks they have plundered. But as much as the story of bank robbery in America focuses on the thieves, it is also a story of those who investigate the heists. As bank robbers became more sophisticated, so did the police, the Federal Bureau of Investigation, and other law enforcement agencies. This captivating history shows how bank robbery shaped the modern FBI, and how it continues to cultivate America's fascination with the noble outlaw: bandits seen, rightly or wrongly, as battling unjust authority.

Write Review - A History of Heists: Bank Robbery in America (2015)

Have you already read A History of Heists: Bank Robbery in America?