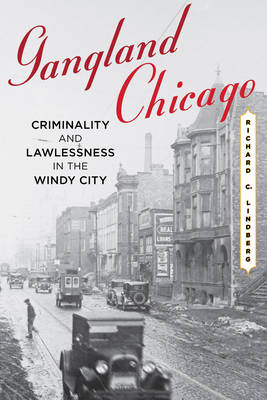 Gangland Chicago: Criminality and Lawlessness in the Windy City by Richard C. Lindberg

(0 votes)
This engrossing tale of gangs and organized criminality begins in the frontier saloons situated in the marshy flats of Chicago, the future world class city of Mid-continent. Gangland Chicago recounts the era of parlor gambling, commercialized vice districts continuing through the bloody Prohibition bootlegging wars; failed reform movements; the rise of post-World War II juvenile criminal gangs and the saga of the Blackstone Rangers in a chaotic, racially divided city. , Gang violence and street crime is endemic in contemporary Chicago. There is much more to the saga of crime, politics, and armed violence than Al Capone and John Dillinger. Gangland Chicago explores the changing patterns of criminal behavior, politics, gangs, youth crime and the failures of reform in its historic totality. Richard Lindberg takes the reader on a journey through decades of a troubled past to delve deep into the evolution of street gangs and organized violence endemic in Chicago. Small ethnic gangs organized in ethnic slum districts of the city expanded into the well-known organized crime syndicates of Chicago's history. Gangland Chicago is full of stories of unchecked violence, lawlessness, and mayhem. Unlike other standard true crime accounts focused exclusively on the Prohibition era, this historical look-back probes the obscure and forgotten dark corners of city crime history. Lindberg details how both "organized" and "dis-organized" street gangs have paralyzed city neighborhoods and transformed the crimes of the Windy City from street thuggery and common ruffians protected and nurtured by politicians into a protected class is gripping. Gangland Chicago is a revealing look at the Chicago underworld of yesterday and today. This comprehensive volume is sure to entertain and inform any reader interested in the evolution of organized crime and gangs in America's most representative city of the American Heartland.

Trailer: Gangland Chicago: Criminality and Lawlessness in the Windy City (2015) ×

Have you already read Gangland Chicago: Criminality and Lawlessness in the Windy City?