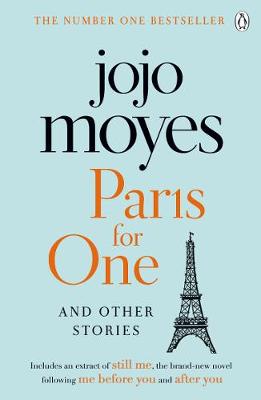 Paris for One and Other Stories by Jojo Moyes

"Paris for One and Other Stories  is a collection of short stories I’ve written over the past decade. They’re mostly love stories - between stranded tourists and waiters, disappointed wives, Wotsit-coloured television presenters and jewel thieves. There are plenty of twists, and some laughs, and I hope they give you a lift in winter’s bleakest months." - Jojo Moyes

A collection of 11 unmissable short stories from the Number One internationally bestselling author of Me Before You and After You.

Nell is twenty-six and has never been to Paris.

She's never even been on a romantic weekend away - to anywhere - before. Travelling abroad isn't really her thing. But when Nell's boyfriend fails to show up, she has the chance to prove to everyone - including herself - that she can be independent and intrepid. Alone in Paris, Nell finds a version of herself she never knew existed...

In the ten other stories, Jojo Moyes introduces us to a cast of strong, relatable women in the midst of their everyday lives. In Honeymoon in Paris, featuring characters from her bestselling novel, The Girl You Left Behind, Liv and Sophie - though decades apart - both find that marriage is only the beginning of their love stories.

In Crocodile Shoes, a businesswoman's blossoming confidence emerges from a fateful changing-room mix-up. And in both Love in the Afternoon and A Bird in the Hand, two couples dance around the trickiness of long-time marriage. In this irresistible collection, readers will be whisked from elegant perfume shops to taxis to five-star hotel rooms and more.

Jojo Moyes takes every-day, real life moments and spins them into extraordinary, unforgettable stories and in Paris for One and Other Stories - funny, charming, and unmissable - she is at her brilliant best.

Have you already read Paris for One and Other Stories?