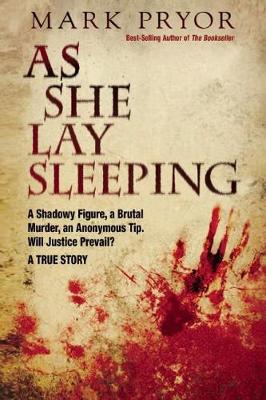 As She Lay Sleeping: A Shadowy Figure, a Brutal Murder, an Anonymous Tip, Will Justice Prevail? — A True Story by Mark Pryor

(0 votes)
Savagely attacked as she lay sleeping on the sofa, Natalie Antonetti's skull was shattered. Bizarrely, she was able to move about her apartment, changed clothes and tried to speak to her son. Her words never came. Two weeks later she was dead. The only lead was a neighbor who claimed to have seen a shadowy figure wielding a child's baseball bat an hour prior to the attack. Despite a wide search for leads and questioning some suspects, the police were unable to find anyone who matched the description and the case grew cold. Then out of the blue, a woman contacted the police claiming her husband, Dennis Davis, shockingly revealed to her he had killed Natalie. With no DNA, no fingerprints, no eyewitness and two witnesses who refused to testify, former journalist and rookie prosecutor Mark Pryor committed to bring justice to Natalie's family. This, his first homicide case would require him to be a sleuth, investigator and prosecutor all with the deadline nipping at this heels. He vowed to do it. As She Lay Sleeping follows the twisted and often murky criminal investigation all the way to its dramatic courtroom climax in this true crime thriller.

Write Review - As She Lay Sleeping: A Shadowy Figure, a Brutal Murder, an Anonymous Tip, Will Justice Prevail? — A True Story (2013)

New Topic - As She Lay Sleeping: A Shadowy Figure, a Brutal Murder, an Anonymous Tip, Will Justice Prevail? — A True Story (2013)

Trailer: As She Lay Sleeping: A Shadowy Figure, a Brutal Murder, an Anonymous Tip, Will Justice Prevail? — A True Story (2013) ×

Have you already read As She Lay Sleeping: A Shadowy Figure, a Brutal Murder, an Anonymous Tip, Will Justice Prevail? — A True Story?