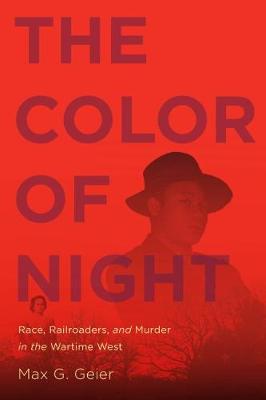 The Color of Night: Race, Railroaders, and Murder in the Wartime West by Max G. Geier

(0 votes)
On an unusually cold January night in 1943, Martha James was murdered on a train in rural Oregon, near the Willamette Valley town of Albany. She was white, southern, and newly-married to a Navy pilot. Despite inconsistent and contradictory eyewitness accounts, a young black cook by the name of Robert Folkes, a trainman from South Central Los Angeles, was charged with the crime. The ensuing investigation and sensational murder trial captured national attention during a period of intense wartime fervor and extensive black domestic migration. Folkes's trial and controversial conviction-resulting in his execution by the state of Oregon-reshaped how Oregonians and others in the West thought about race, class, and privilege.In this deeply researched and detailed account, Geier explores the attitudes of local town-folk, law officers, and courtroom jurors toward black trainmen on the West Coast, at a time when militarization skewed perceptions of virtue, status, and authority. He delves into the working conditions and experiences of unionized black trainmen in their "home and away" lives in Los Angeles and Portland, while illuminating the different ways that they, and other residents of Oregon and southern California, responded to sensationalized reports of "Oregon's murdered war bride." Prosecutors, police, and reporters colluded, in Wartime, to stage the trial as a moralizing ritual for a public purpose that had little to do with justice.The investigation, trial, and conviction of Robert Folkes galvanized civil rights activists, labor organizers, and community leaders into challenging the flawed judicial process and ultimately the death penalty in Oregon, serving as a catalyst for civil rights activism that bridged rural and urban divides. The Color of Night will appeal to "true crime" aficionados, and to anyone interested in the history of race and labor relations, working conditions, community priorities, and attitudes toward the death penalty in the first half of the 20th century.

Write Review - The Color of Night: Race, Railroaders, and Murder in the Wartime West (2015)

New Topic - The Color of Night: Race, Railroaders, and Murder in the Wartime West (2015)

Trailer: The Color of Night: Race, Railroaders, and Murder in the Wartime West (2015) ×

Have you already read The Color of Night: Race, Railroaders, and Murder in the Wartime West?