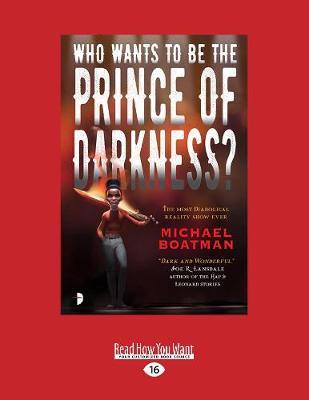 Who Wants to be the Prince of Darkness? by Michael Boatman

(0 votes)
Lucifer is enjoying his retirement in an obscure corner of Limbo when he learns of a plot by Gabriel, the current ruler of Hell, to use humanity's greatest weapon against it ' Television! Cue the hottest reality game-show ever conceived: Who Wants To Be The Prince Of Darkness? Gabriel orchestrates an "Infernal takeover" of Earth by stealing unwitting mortal souls and sending them to a mostly empty Hell, hoping to reinvigorate the Infernal Realm.Now Lucifer must find a living champion to seize control of Hell and free millions of stolen mortal souls before the theft becomes permanent. But who would ever want to be Hell's champion?File Under: Fantasy [ Down Among The Dead Men | Fifteen Minutes For Eternity | Damned If You Do | The Morningstar ]

Have you already read Who Wants to be the Prince of Darkness??