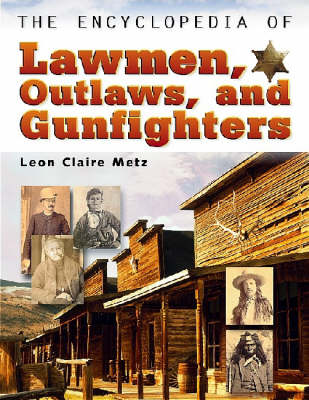 The Encyclopedia of Lawmen, Outlaws and Gunfighters by Leon C. Metz

(0 votes)
Standoffs, saloons, and sunsets spring to mind when one envisions the rough and timble early days of the American frontier. The golden period of the American West produced some of the most notorious badmen and bravesy lawmen in American history. Some rogues are familiar - John Weslet Hardin (who, it is said, killed more than 40 men), William Bonney (Billy the Kid), Wild Bill Hickok, and Butch Cassidy and the Sundance Kid. Others were not as well known but were no less dangerous - John Slaughter, Buckskin Frank Leslie, Wild Bill Longely, Liver-Eating Johnson, and Bill Doolin. Then there are the peacekeepers, the brave men who helped tame the Wild West - The Earp brothers, Pat Garrett, and Texas Rangers such as James Gillet and Dallas Stoudenmire. This guide features 400 entries, providing biographies of the men and women, from both sides of the law, who made their mark on the American frontier. Topics include legendary incidents such as the shootout at the OK Corral and the Johnson County War, as well as subjects that marked the era such as dime novels, faro, and quick draw artists.

Write Review - The Encyclopedia of Lawmen, Outlaws and Gunfighters (2002)

New Topic - The Encyclopedia of Lawmen, Outlaws and Gunfighters (2002)

Trailer: The Encyclopedia of Lawmen, Outlaws and Gunfighters (2002) ×

Have you already read The Encyclopedia of Lawmen, Outlaws and Gunfighters?