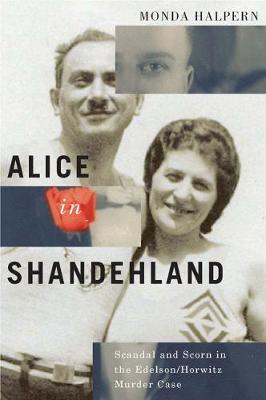 Alice in Shandehland: Scandal and Scorn in the Edelson/Horwitz Murder Case by Monda Halpern

(0 votes)
By 1931, Ben and Alice Edelson had been married for two decades and had seven children, but for years Alice had been having an affair with the married Jack Horwitz. On the night of 24 November, Ben, Alice, and Jack met at Edelson Jewellers to "settle the thing." Words flew, a brawl erupted, and Jack was shot and killed. The tragedy marked the start of a sensational legal case that captured Ottawa headlines, with the prominent jeweller facing the gallows. Through a detailed examination of newspaper coverage, interviews with family and community members, and evocative archival photographs, Monda Halpern's Alice in Shandehland reconstructs a long-silenced murder case in Depression-era Canada. Halpern contends that despite his crime, Ben Edelson was the object of far less contempt than his adulterous wife whose shandeh - Yiddish for shame or disgrace - seemed indefensible. While Alice endured the censure of both the Jewish community and the courtroom, Ben's middle-class respectability and the betrayal he suffered earned him favoured standing and, ultimately, legal exoneration.Revealing the tensions around ethnicity, sexuality, gender, and class, Alice in Shandehland explores the divergent reputations of Ben and Alice Edelson within a growing but insular and tenuous Jewish community, and within a dominant culture that embraced male success and valour during the emasculating 1930s.

Write Review - Alice in Shandehland: Scandal and Scorn in the Edelson/Horwitz Murder Case (2015)

New Topic - Alice in Shandehland: Scandal and Scorn in the Edelson/Horwitz Murder Case (2015)

Trailer: Alice in Shandehland: Scandal and Scorn in the Edelson/Horwitz Murder Case (2015) ×

Have you already read Alice in Shandehland: Scandal and Scorn in the Edelson/Horwitz Murder Case?