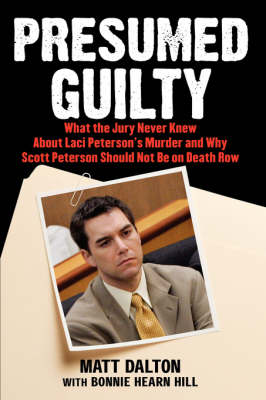 Presumed Guilty: What the Jury Never Knew About Laci Peterson's Murder and Why Scott Peterson Should Not Be on Death Row by Matt Dalton

(0 votes)
No one knows the story behind the sensational headlines of the Scott Peterson murder trial better than defense attorney Matt Dalton. For six straight months after Peterson's arrest, Dalton was the defense's only full-time investigative attorney on the case. During that time, he lived in Modesto and investigated every element of the case, interviewing scores of witnesses, reviewing more than 35,000 pages of police documents, and meeting almost daily with Scott Peterson in jail. What he has uncovered will astound even the most informed observers of the Laci Peterson murder case and challenge the most deeply held beliefs about what really happened to Laci Peterson on Christmas Eve, 2002. This is the first book to go inside the Peterson defense team, and the only book to detail all the evidence that the jury did not hear -- evidence that might have led to Scott Peterson's acquittal, and that will surely play a crucial part in his pending appeals. Among the revelations in Presumed Guilty: Reports from numerous witnesses who saw Laci Peterson alive and well the morning of December 24, after the police claim Scott Peterson had already killed her; none of them testified at trialThe story of another woman, eight months pregnant, who was harassed by two men the morning of December 24 only five blocks from the Peterson homeThe burglary that reportedly occurred directly across the street from the Peterson home on the morning of December 24, and the confessed burglars' questionable claims that the burglary happened days laterPreviously unreported details of the autopsy reports on Laci Peterson and her son, which cast strong doubts on key elements of the prosecution's caseThe disappearances of six pregnant women, in addition to Laci, reported missing and presumed dead within eighty miles of Modesto between 1999 and 2002 Compelling, provocative, disturbing, Presumed Guilty is the fascinating story of one lawyer's relentless efforts to find the truth behind one of the most complex and notorious murder cases in American history.

Write Review - Presumed Guilty: What the Jury Never Knew About Laci Peterson's Murder and Why Scott Peterson Should Not Be on Death Row (2005)

New Topic - Presumed Guilty: What the Jury Never Knew About Laci Peterson's Murder and Why Scott Peterson Should Not Be on Death Row (2005)

Trailer: Presumed Guilty: What the Jury Never Knew About Laci Peterson's Murder and Why Scott Peterson Should Not Be on Death Row (2005) ×

Have you already read Presumed Guilty: What the Jury Never Knew About Laci Peterson's Murder and Why Scott Peterson Should Not Be on Death Row?