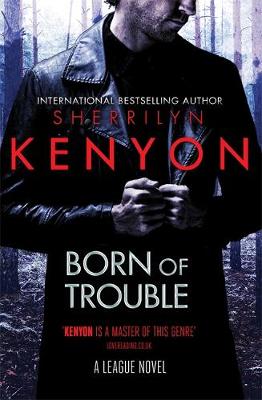 Born of Trouble by Sherrilyn Kenyon

'A publishing phenomenon... [Sherrilyn Kenyon] is the reigning queen of the wildly successful paranormal scene.'

'Kenyon builds a story that is wall-to-wall action, yet touched with poignancy.'

Mack Hinto came into the world in the middle of a vicious firefight. It's said her own mother refused to leave her battle-station or cut the cord to her daughter until after they were safely away from the authorities out to end them. She's happily lived her life in danger and turmoil ever since.

As a member of the Septurnum Tavali, Mack knows the face of her enemy like the back of her hand. So when she sees a chance to avenge her family's honour by figuratively blackening Ryn Dane's eye and stealing his Wasturnum cargo, she seizes it. What she never expects is the lengths the competing Tavali captain will go to to reclaim his cargo . . . and his dignity.

The illegitimate son of the queen of a pirate guild and a murdered aristocrat, Ryn Dane has always been torn between two worlds and classes. Two destinies at war with each other. Because of that, there is nothing he hates more than politics and family feuds. Nothing more than treachery and duplicity. So when the woman who seduces him to steal his cargo turns out to be the daughter of his mother's sworn enemy, whose family has a generational grudge-match against his own, his need for vengeance goes into overdrive. No one will play him for a fool, especially not over politics.

Yet Mack is a formidable force, and as war tears their universe apart, old enemies return pitting the two of them against each other. Now, if Ryn doesn't find a way to make peace, more than just their lives will be at stake.

Have you already read Born of Trouble?