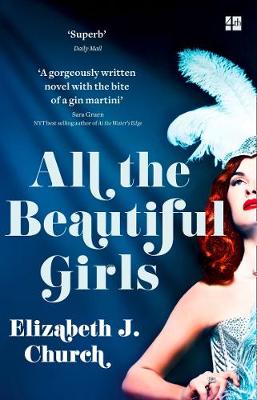 All the Beautiful Girls: An uplifting story of freedom, love and identity by Elizabeth J. Church

In the summer of 1968, Ruby Wilde is the toast of Las Vegas. Showgirl of the Year, in her feathers and rhinestones, five-inch heels and sky-high headdresses, she mesmerises audiences from the Tropicana to the Stardust. Ratpackers and movie stars, gamblers and astronauts vie for her attention and shower her with gifts.

But not so long ago Ruby Wilde was Lily Decker from Kansas: an orphaned girl determined to dance her way out of her troubled past. When she was eight years old, Lily survived the car crash that killed her parents and sister. Raised by an aunt who took too little interest in her and an uncle who took too much, dancing was her solace, and her escape. When a mysterious benefactor pays for her to attend a local dance academy, Lily's talent becomes her ticket to a new life.

Now, as Ruby Wilde, the ultimate Sin City success story, she discovers that the glare of the spotlight cannot banish the shadows that haunt her. As the years pass and Ruby continues to search for freedom, for love and, most importantly, herself, she must learn the difference between what glitters and what is truly gold.

Write Review - All the Beautiful Girls: An uplifting story of freedom, love and identity (2019)

New Topic - All the Beautiful Girls: An uplifting story of freedom, love and identity (2019)

Trailer: All the Beautiful Girls: An uplifting story of freedom, love and identity (2019) ×

Have you already read All the Beautiful Girls: An uplifting story of freedom, love and identity?